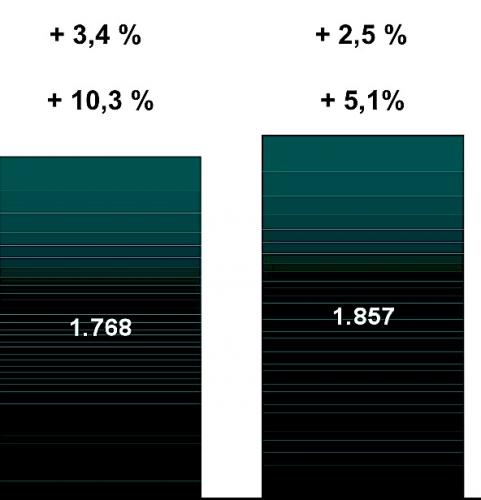 After a very strong organic growth period in 2011 with more than 10 % plus, the urnover of organic food in supermarkets had a bit more than 5 % plus in 2012. The sales of conventional food grew during the same period quite less. What effected a lot on this part of the market has been in 2012 the final decline of the drug-market-chain Schlecker which has been pressing down the non-organic sales in this field. But in the end the failure of the former no.1 in this field did not mean really a lot.

Smaller deparment stares with 1 000 to 2 500 sqare meters have been the winners ofs organic sales, what already has been revealed during the year. And also sales of organic food in discvount markets did well. In Germany the normal retail doing around 55 % of the turnover og the total organic food ist he most important important player. That ist he reason why it is so important for a more negative outlook, that in general the leading german and international brands in german food-market are offering to the consumers less organic products than in the neigh-bouring countries and try more to get confident with semi-organic, sustainable offers. And also the last trend in food is to offer every food as regional, which says nothing concerning a better quality.