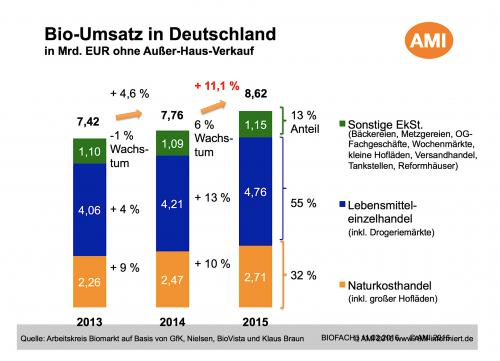 Since 2015 Germany is back at the top of organic development: organic flour, milk drinks, cooking oil, eggs and milk as well had an remarkable increase of consumption. The major growth has to be seen in retail, which also makes constantly 55% of the organic turover. Here growth came back with 13 % and a huge part had been done in the discount shops. The specialist shops only had a plus of 10 %. If we compare this to the the years before with a growth of 6 to 7 % this is a huge step and a typical way: real growth of comsumption is mostly caused by a small selection of articles and normally this takes place in high volume places, id est dicount. We also had a positive development in supermarkets, but that will be mostly to be seen this year with the new Alnatura 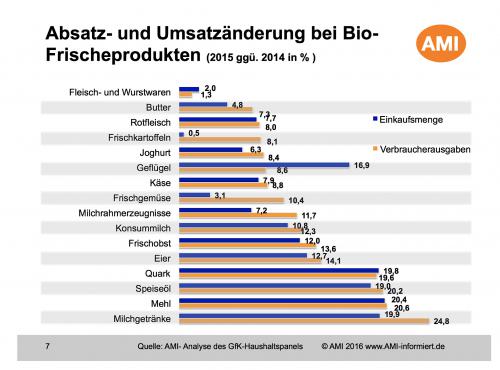 Last year we had more the development in the basics also withe new shop-brand  dmBio, which gave a push to the market. So we have now in Germnay a total turnover of 8,623  Billion Euro -not regarding the additional part restaurant and canteens.

The good news also is, that there there has been mainly a groth of sold the real amount of products and not only a  higher price, what we had very often in the last years.

But  – of course – the other thing is, that now we have to face more and more in Germany a lack of national and local organic production and agriculture covering the increased demand. for all the new vegan offers there will be a demand of imported raw material and that means, we have to talk about realiability and trustful origins of all this necessary sourcing.