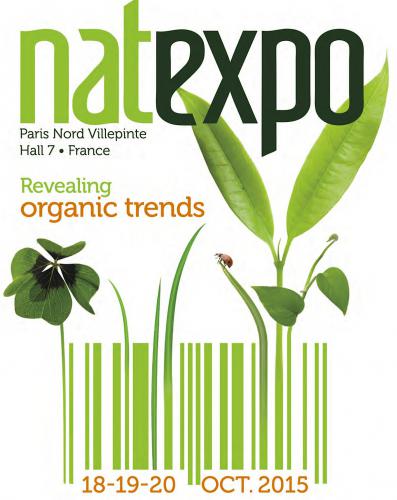 The bi-annual and largest organic food fair in France with over 10 000 visitors and exhibitors from all over Europe. France has an extremely rising consumption of organic products since 2008 and is therefore of increasing interest as a sales market. With a Bioabsatz worth 5 billion euros, France has firmly established itself as the second most important organic market in Europe. The national subsistence similar to Germany no longer decken.Zur time is similar to the French the German organic market in its best periods of growth – In many areas, the French manufacturer. Interesting for all, have to offer the organic products and want to adapt to the dynamic French market.
In the context of the exhibition is a business dating planned with buyers of all major French retail chains and in combination with such contacts is a round thing:
Natexpo in Paris October 18 to 20 2015 keywords
• An imported French organic trade fair for retailers, but also potential customers from the food retail sector. (The fair has traditionally had an interest in natural cosmetics and food supplements, has previously played a larger role. The core are now organic food.)
• constant over 10 000 visitors mainly from France and neighboring European countries
By Dr. Klaus-Jürgen Holstein|2019-05-09T16:23:33+02:0010. June 2015|