Germany: Organic growth rather moderate, but professionals quite optimistic on BioFach Fair

Home/Germany: Organic growth rather moderate, but professionals quite optimistic on BioFach Fair
Previous Next

Germany: Organic growth rather moderate, but professionals quite optimistic on BioFach Fair

The growth of organic food comsuption in Germany has been 4,8 % and the whole part is close to 8 Billion Euro. In France it´s coming close to 5 Billion Euro. So the center of Europe is getting a growing organic part. That has been the major impression of the BioFach Fair in Nuremberg.

BioFach Fair has been a hotspot this year: more visitors. Compared to the time of ten years ago the fair did not get bigger. Change up to this years has been that the exhibitors nowadays are more European. The Netherlands have been country of the year.

The most important subject amoung the new products are the vegetarian and vegan food-products which are very trendy now expecially in Germnay. This trend is even new to the german professionals. A lady told Us: At the time, when I turned to vegetarian nutrition it never has been that trendy. 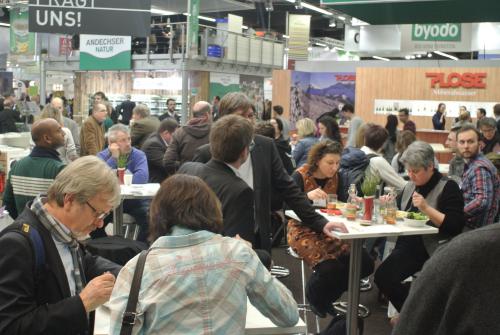 And another item you could see on this organic fair:  The genratation of todays organic people is completely young. The vegetarian trendsetters are less than thirty, the forerunners female, well educatet, living more in the big cities and having a more practical viewpoint of nutrition.

As every years since more that ten years the specialist journal “Ein Herz für Bio” did celebrate super- and hypermarkets with a high-class organic affinity. The prizewinners came together for a cocktail at the french pavillion, hall 1.