2019 was a boom year for organic products in Germany and Europe And we also see a little more clearly with which products and areas organic is growing.

Home/2019 was a boom year for organic products in Germany and Europe And we also see a little more clearly with which products and areas organic is growing.
Previous Next

2019 was a boom year for organic products in Germany and Europe And we also see a little more clearly with which products and areas organic is growing. 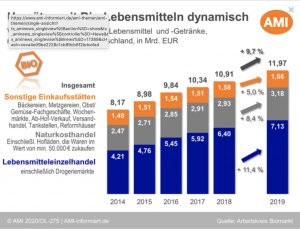 In terms of German organic sales, all product groups grew significantly in 2019: After the drought in 2018, German and European organic farmers harvested and sold significantly more fruit and vegetables in 2019, which boosted sales of organic apples, carrots and the like , In this way, the food retailer was able to expand its fruit and vegetable ranges. The organic potato harvest fell less in 2018 than the conventional one, so the price difference between organic and conventional goods shrank and boosted the sale of organic potatoes. The overall growth came to a large extent again through conventional food retailing, which again grew significantly faster than the specialist retail trade.
In 2019, customers bought organic milk and dairy products, of which significantly more ended up in the refrigerated counters, in 2019. Organic cheese and drinking milk, the most important sources of revenue on the organic dairy product market, grew by 15% each. All in all, the organic retailers achieved a sales increase of 11% with the ‘White Line’. At the same time, customers are increasingly turning to organic milk and meat alternatives. Sales of organic meat substitute products increased by 19%, conventional meat substitutes increased by 27%, especially with the introduction of burger made from pea protein. Turnover for organic milk alternatives rose by as much as 33% and sales volumes by as much as 39%.
The highest share of sales in the entire food market was achieved with organic consumption milk and flour with 26% each and organic eggs with 23%. Individual types of fruit and vegetables also have a high organic share of total sales: lemons with 33%, carrots with 31%, zucchini with 29% or bananas with 23%. 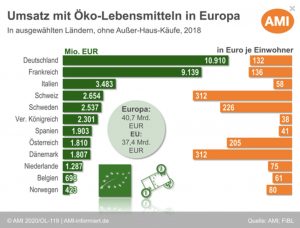 With all the joy of the progress in Germany, it remains to be noted that Danes and Swiss in Europe spend significantly more per capita on organic products than the Germans and that the country France is preparing itself with its organic market, which is increasingly oriented towards a local and regional raw material base, to catch up with the German figures with a noticeably higher willingness to spend on high-quality organic products in the foreseeable future. Especially since the figures provided here only relate to 2018.