Home/IFCN: Top 20 dairies – the strongest powers more in the western hemisphere as the typical milk-orientated consumer markets
Previous Next 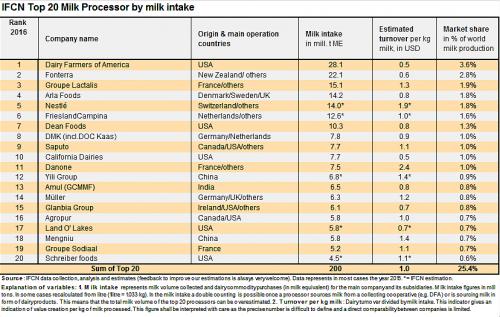 Farmers of America lead the ranking in the IFCN Top 20 Milk Processors list with a milk intake of 28.1 mill t ME in 2015. The international cooperation Müller and Arla increased its intake about 1.7-2.0 mill t ME and by this upgrade their position in the list since 2014. Also the German processor DMK gained in the ranking, by the acquisition of the Dutch DOC Kaas company and adding 1 mill t ME to the milk intake. There are new entries in the top 20 list, Agropur and Schreiber Foods, interestingly both placed in the North American market. But no only western processors are key players in the dairy world. Amul from India and Yili and Mengniu from China collecting together 19.1 mill t ME of milk, nearly 10% of the top 20 processors.

Turn-over per kg of processed milk ranges between 0.5-2.4 USD per kg in 2015, whereas Nestlé and Danone ranked highest and DFA and California Dairies ranked lowest. The IFCN Top 20 Milk Processor List is biannually released with thorough validated data and comparable variables, what makes this list unique in the dairy economic world. This list is an important tool for the entire dairy industry and supply chain to better judge the perspectives of the national milk production and the global scale of milk processing.